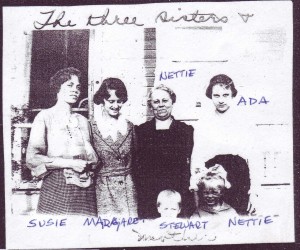 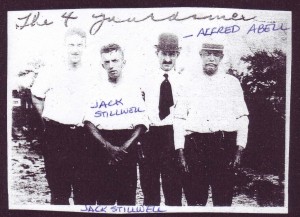 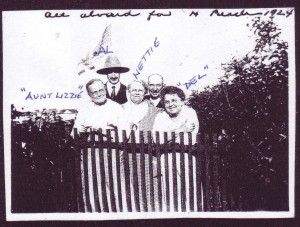 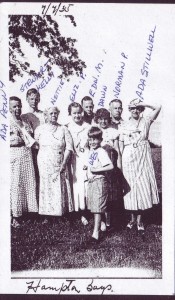 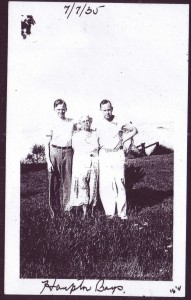 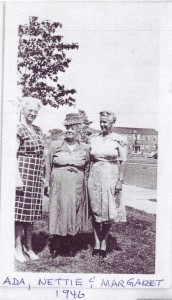 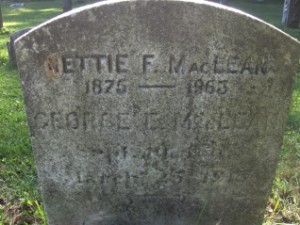 This will be one of the more difficult pieces to write because I’m not sure there will be much “balance” in it. I’ve heard a lot about Nettie over the years and to be honest – most of it was not complimentary. Craig Walker referred to his grandmother as a “mean old broad” and admitted to being afraid of her as a child and avoiding her as an adult. He told me that Nettie could hold a grudge forever and had an opinion about everyone and everything. My mother Shirlee agreed with Craig’s assessment. My grandmother Margaret, who never had an unkind word about anyone, referred to her mother as “difficult.” 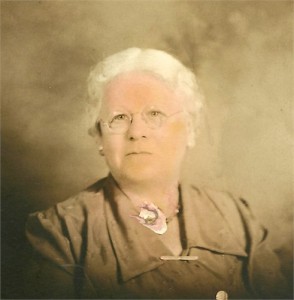 There has been some discussion about whether her name was Henrietta or simply Nettie. Nettie is the diminutive form of the name and most of her documentation is in that name. My belief that her birth name was Henrietta is based on two specific records. The 1 Jun 1875 New York State Census1 enumerates the Frith family in Brooklyn as:
George age 25,
Henrietta 25,
Ruth 2,
Henry 4 months.
It is probable that the census worker used the Henr. abbreviation in his notebook and simply wrote Henry instead of Henrietta when filling out the master sheet.

The second item is the 1 Jun 1915 New York State Census when she is enumerated as Henrietta.2 This would have been her first official record after her husband died and she gave her full name. However, Nettie most likely chose to use the diminutive and it’s the name her family used for her.

Nettie’s mother died in 1884 when Nettie was only nine. She told her granddaughters that she had a vivid memory of her mother lying in the casket with a stillborn infant in her arms. My mother and her cousins were unnerved by this story at a very young age.

Nettie married her first cousin George Edward McLean on 12 July 1893.3 The news article about their secret marriage being discovered due to her fit of jealousy is revealing in its own way. Very early on, Nettie appears to be a woman who went after the things she wanted. She moves from Brooklyn to North Hempstead, Long Island (then Queens County) after her marriage to George.

Their first child was a stillborn boy born 19 May 1894.4 He was interred in the McLean family plot. Their next three children were daughters: Susan (Susie) Wynn born 20 Mar 1897,5 Margaret Frith born 22 Apr 1899,6 and Ada Mae born 25 Aug 1901.7 There is a five-year-gap and then the two boys appeared: Edward Frith born 29 Aug 1906,8 and Welling Seeley born 1908.9 The family was enumerated there together on 16 Apr 1910.10 Life appeared to be good as they own their home and have a servant to help in the kitchen. Margaret could not recall a time growing up when her mother did not have some type of domestic help.

George passed away 25 Mar 1915,11 and his mother Susan Winn (Frith) McLean (Nettie’s aunt) passed on 21 May 1915.12 Nettie was now on her own with five children. Oldest daughter Susie married John T. Kelley the following year. John Kelley, born 18 Jul 1888 in Brooklyn 13 was a fireman on the Long Island Railway and not approved of by Nettie. He died 28 Oct 191814 of the Spanish Influenza (I’m awaiting the death certificate for confirmation of this family story) and was buried in the McLean family plot in Roslyn Cemetery. 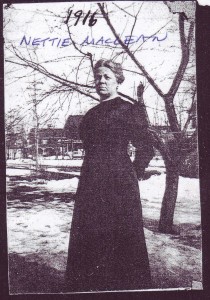 Sometime between 1915 and 1920, Nettie chose to change the spelling of her last name to MacLean. The family story was that Nettie was sure the “Mac” spelling denoted the Scottish and the “Mc” spelling was for the Irish. According to my sources, Nettie appeared to feel the Irish were less than desirable and wanted to make sure that everyone knew they were Scottish. This was a common misconception that was making the rounds in the early 20th century, but those of us who do genealogy know that spelling means nothing. This is the only branch of the family that made the switch in spelling. It was a source of confusion in the research for some time.