The hunt for Annie Barrett was on, and she immediately turned up on the 1900 census in Camden, New Jersey. I knew I had the right woman when I saw her parents were both born in England. There were several hours of crazed digging as I worked through the records and found the 1910 census and the 1895 New Jersey State Census. After marrying Thomas, she appears on records as both Phoebe and as Ann/Anna/Annie. I also found New Jersey birth and marriage registrations for several of her children, as well as a Social Security Application for one to prove Annie Barrett’s maiden name was Walker.

Here’s what I can prove so far along with a timeline for Phoebe Ann and her husband Thomas P. Barrett:

Phoebe Ann Lincoln Walker married Thomas Patrick Barrett about 1884. Thomas was born about 1863 in Ireland, the son of Thomas Barrett (1843-1875) and Johanna Griffin (1843-?). His immigration dates appear as 1865/66 and he lists himself as naturalized. Thomas appears with his family on the 1870 census as Patrick. There are multiple Thomas and Patrick Barretts in Philadelphia and New Jersey which has lead to some confusion. However, our Thomas Patrick Barrett is a machinist in Camden from at least 1895-1940. His job and location do not vary, and throughout his adult life, one or more of his children is in the same household.

The documentation is available on the BurgraffScott family tree on Ancestry and being added to FamilySearch.org.

Phoebe Ann Lincoln Walker has been one of those women that has made me insane over the years. We found her full name in the baptismal record. She was born 28 Jul 1865 and baptized 8 Nov of that year in the Church of the Redemption. Like many children that year, she received Lincoln’s name after his assassination. She appeared on the 1870 census as Phoebe and on the 1880 census as Annie L. As with many women, she disappears after 1880. The marriage records aren’t helpful and the twenty year gap between census records adds to the problem.

I have searched for Phoebe Ann dozens of times under both names, but never found her. Based on her mother Ann (Orme) Walker’s 1900 census I knew Phoebe Ann was still alive and out there just waiting to be found. This last week, I was writing about the Walkers, and I decided to go through all the documentation one last time. Phoebe was still a dead end, but I worked through all her siblings again hoping for a clue.

With the addition of the Pennsylvania Wills and Probate by Ancestry in 2015, there was finally an easy way to work through the wills for all the family members. There was no will for Phoebe’s brother, Ralph Orme Walker, but on a whim, I decided to check for a will for his second wife Kate who died 29 Jan 1901. I hoped that I might find a sibling or something that would lead me to Kate’s maiden name. She had a will, but she didn’t name any siblings. However, God bless Kate, she did name all of Ralph’s surviving siblings—including Annie Barrett.1

Jeremiah Walker (1833-1885) was an interesting man to chase. I first found him with his family in England, and then later, in the Church of the Redemption, Spring Church, in Philadelphia. This is one of those families that was exciting to chase because there were records. It was also incredibly sad to chase this family as so many of the children died young.

Perhaps the best part of chasing this family was tag-teaming with my cousin Jamie. When I’ve done all I can and become frustrated, Jamie will step in and take over. She always seems to find the missing link to take us in the right direction. We were at a dead stop on the two oldest surviving children in this family when she found the right connection. Once I had the right names, I went digging through a different set of records and found the proof that linked his younger two daughters to Jeremiah. Jamie and I work well together and it’s always a lot of fun.

Jeremiah was born about 1833 in Ashton-Under-Lyne, the youngest known child of Jeremiah Walker and Mary Newton. His first documented appearance was on the 1841 census in the home of his parents.1 His age (birth year) remains consistent throughout his reasonably well documented life. He was baptized at the age of 11, on 18 Aug 1844 in St. Michael’s.2

On 13 Aug 1848, at the age of 15, Jeremiah arrived in Philadelphia aboard the Wyoming.3 It appears that he made this trip alone.

He is next found as a weaver on the 1850 census in Westhampton, Burlington, New Jersey.4

Jeremiah was married to Mary Jane Kimble on 28 Jan 1856 in Philadelphia at the Church of the Redemption, Spring Church.5 The record states she was “of Mercer County, NJ” but does not provide us with the couple’s ages or any other helpful information. 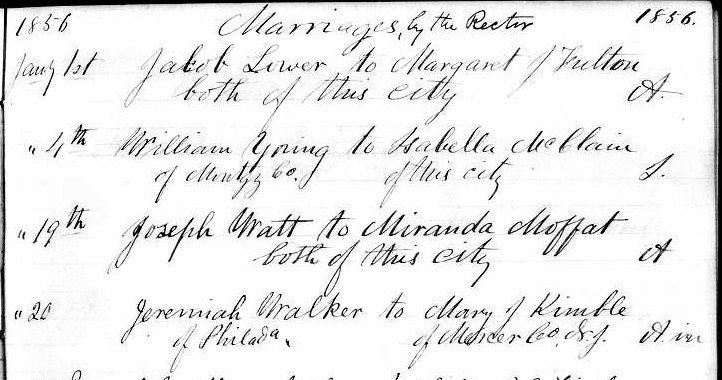 We were aware of Mary Jane’s maiden name based on her 1879 death certificate, which stated Mary Jane Kimble was 42 years old (born about 1837) in Burlington County, New Jersey, the daughter of John Kimble and Hannah Steward.6

**NOTE** There is a 7 Sep 1852 marriage record from St. Stephen’s Episcopal Church in Philadelphia for a Jerry Walker to Mrs. Mary J. Bailie which led to some early confusion. Our Jeremiah would have been about 19 and Mary Jane Kimble would have only been about 15/16. There is a Jerry Walker (1816-1886) buried in Laurel Hill Cemetery along with Mary Jane Walker died (1817-1873) who would be of the right ages for this record. They are both listed as being born in Philadelphia and found on the 1870 census in Ward 7 while our Jeremiah is in Trenton, New Jersey.

Jeremiah appears to have stayed in Philadelphia from at least 1856 through mid-1861. His first three children were born and baptized there. 1861 would have been a difficult year for the family as Scarlet Fever claimed their oldest daughter just weeks after the birth of their third child. Perhaps this was the impetus to move from Philadelphia. By late 1863, he and his family have relocated to Chambersburg, Mercer, New Jersey. His fourth child John Rogers Walker was born there 16 Nov 1863. [Chambersburg was a separate municipality at that time; it has since been incorporated by Trenton and most records are listed with Trenton as the location.] Jeremiah and Mary Jane had the rest of their children there and remained there for the rest of their lives.

He served during the Civil War in the 4th Regiment, New Jersey Infantry, Co B. He applied for an invalid pension, application #183218, and was approved, certificate #133577. There was an application filed for his minor children, application #351584 after his death. Those records should be available through the National Archives.

Mary Jane passed away 4 Nov 1879 and was buried in Mercer Cemetery in Trenton.7 There is a Mercer County Death Certificate which states her death as 21 Nov 1879, which is obviously in error and probably the date the certificate was issued.8 Her obituary appeared 6 Nov 1879.9

I haven’t yet located Jeremiah or his surviving children on the 1880 census or 1885 New Jersey State Census. Jeremiah died 6 Sep 1885 in Chambersburg, Mercer, New Jersey.10 He was interred in Mercer Cemetery.

Together, Jeremiah and Mary Jane had nine known children:

Margaret Ann – born 3 Jul 1859 in Philadelphia and baptized 9 Jul 1860 at the Church of the Redemption, Spring Church, Philadelphia, along with her older sister Mary Alice.13 Margaret shows her birth date and Jan 1858 on the 1900 census, but her baptismal record provided her birth date. Also, her older sister was born in Nov 1857 so the Jan 1858 date would have been impossible. Margaret married Joseph C. I. Stone on 9 Feb 1879. This date appears in several family trees, however I have not yet found a source record of the marriage.

As I’ve previously noted, there is always one child in the family who seems to pick up the slack. In this family, it was Margaret. After the death of Jeremiah in 1885, Margaret petitioned to be guardian of her younger sisters Mary Elizabeth and Sarah.14

Her sisters remained with her even after their marriages. Since we didn’t find the family on the 1880 Federal Census or the 1885 New Jersey Census we were unaware of the names of the two younger girls until the 1900 Federal Census. The guardian records are filed under the children’s names. 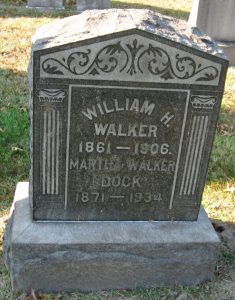 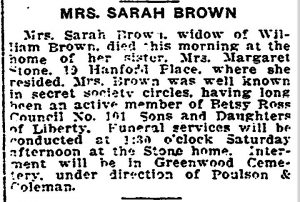 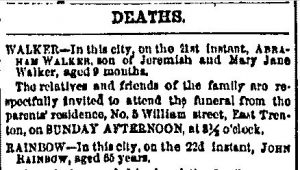