Who the hell are these people?

As noted in this narrative there are several people in the Brown family plot who I have not yet been able to definitively identify as family members. However, I am convinced they are “related” to the Brown-Frith family in some way.

1. Robert Smith, 32 years, interred 14 Jan 1849, grave 15. He was interred the same day as Sarah Brown Mason and her brothers John and George. While I have been unable to find any specific information on him, his burial information would indicate a date of birth about 1813-1817. While it is possible that he’s a nephew or cousin, the fact that the family moved him here at the same time they moved their own children indicates a very close relationship. With such a common name and no additional information, Robert’s full identity and relationship to the family may be lost to time.

2. Ellen Winn, 76 years, interred 15 Jul 1860, grave 14. Ellen b. 1784 and William Winn b. 1781 arrived from England with William and Frances (Brown) Frith on 14 Jul 1837. William Winn died between 1840-1850 but I have not yet located a death record or interment for him. Ellen appears on the 1850 Federal Census with Sarah and Richard Young (relationship unknown) in Williamsburgh, Brooklyn, Kings. However, after William Frith died in 1855, Ellen took in their three youngest children. Frances and William Frith had named their daughter Susan Winn Frith (1839) and another daughter Ellen (1844) and the Winn/Wynn name appeared in two more generations of Frith descendants. Ellen died on 13 Jul 1860 in Brooklyn.

Frances’s mother Elizabeth was still alive and living with Frances’s sister Mary Ann when both Frances and William passed, leaving several minor children. Why would the children live with Ellen instead of Frances’s mother and sister? My best guess is that Ellen Winn is a sister or sister-in-law to either William or Elizabeth (Heriott) Brown or to William Frith’s parents. I’ll attempt to locate a marriage record for William Winn and Ellen to get her maiden name, and I’ll also check the Frith, Brown, and Heriott records for an Ellen. My other hope is to locate guardianship records for the children as they may name a relationship to Ellen.

3. William Norwich, 61 years (b. abt 1805), interred 2 Mar 1860 – I have not been able to determine his relationship – if any to William and Elizabeth (Heriott) Brown or to William and Frances (Brown) Frith. I have managed to establish a timeline:

So… who are they and why are they in the family plot?

There’s always one child who winds up being the caretaker. Often it’s the daughter with no children of her own who the rest of the family seems to gravitate to. In this family that child was Mary Ann.

Mary Anne Walder Brown was born about 1825, presumably in Sussex, England. I have not yet found a birth or christening record for her . She uses the name Mary A. or Mary A.W. throughout life, and her will provided the name Walder. She arrived with her family in New York on 11 Apr 1835, and I can account for her (based on age) on the 1840 census.

Mary Anne died 11 April 1904. She was interred in Green-Wood Cemetery with her husband in Lot 27263, Sec 135. Her will was written on 3 Oct 1901, but wasn’t proven until 16 Nov 1904. She names her niece Ruth Reed (daughter of sister Frances), niece Hattie Knox (daughter of brother Edward), brother Edward Brown, and sister-in-law Eliza Pringle in her will.

Let’s talk about the damn Pringles for a minute. I will generally look at a spouse and attempt to determine who their parents were. In this case, that turned into a bit of an exercise in confusion. On the 1900 Census, Elizabeth Pringle and Charlotte McEndow are both listed as sister-in-laws to the head of household Mary Anne, indicating they are both sisters of Robert W. Pringle.

I went in search of what I presumed were the Pringle sisters.
Eliza Pringle’s 1906 death certificate stated she was born in 1821 in Ireland, the daughter of Hamilton Pringle and Jane McEndon [sic].

Charlotte McEndow’s 1907 death certificate states she was born in 1827 in Ireland, the daughter of James Pringle and Ann Montgomery.

I noticed they were both buried in Green-Wood cemetery so I checked plot records. Charlotte is buried with her son Joseph Hamilton McEndow (1863-1888). Eliza is buried with Margaret P. Bryan (1822-1897) and her husband. Margaret’s death certificate states she was born in 1822 in Ireland, the daughter of Hamilton Pringle and Jane McEndow.

To complicate matters further, buried with Mary Anne and Robert is William Thomas Pringle (1840-1893) who was born in England, son of James and Elizabeth Pringle.

With a lack of adequate records, and being unwilling to expend the many hours it would take to sort out the 65 Pringles in Green-Wood Cemetery, can I just make up my own story here? Margaret and Eliza are the sisters of Robert and the children of Hamilton and Jane (McEndow) Pringle. Charlotte is their younger Pringle cousin who married one of their McEndow cousins and is more sister than cousin to the girls. William Thomas is the son of one of Hamilton’s brothers who went to England. How’s that? *sigh* Yeah… I’ll be unable to leave them alone either. It’s the name and the potato chip syndrome – I’ll have to sort them out. I’ll be back…

My second Brown sibling who drove me to distraction was Edward. He was born 6 Oct 1819 in Suffolk, England, and arrived in 1835 with his family. His birth date came from his obituary;1 I have not yet located a birth or christening record for him. He married Ann Burnett (1819-2 Jun 1897) on 1 Jun 1839 (date and maiden name from his obit). Several trees state that Ann’s parents were William and Rachel (Durrant) Burnett, but I’ve found no real evidence of that. There are numerous Ann Burnetts born 1819-1820 in England. I’ll check the image of her death record when in Salt Lake City to see if it provides any other information, but until someone comes up with a definitive record from New York, I’ll leave that block empty.

The Edward Brown family pulled a great disappearing act. I could not locate Edward between the 1835 passenger list and the 1900 Census.2 I could not locate his son Edward A. after 1868 when he signed his grandmother’s death certificate. There were death dates for Edward and Ann on several online trees and, as usual, not a single damn source for the information. Using the dates online, I went in search of death records and obituaries. I first found Ann’s death record and a death notice, but it provides no help with her parents.3

In the end it really only took two records to open up the Edward Brown family for me.

First: Edward’s 1906 obituary. At the time of his death, Edward was living with his daughter Elizabeth Mason (born in Canada)- she was the only child that I knew at the time. 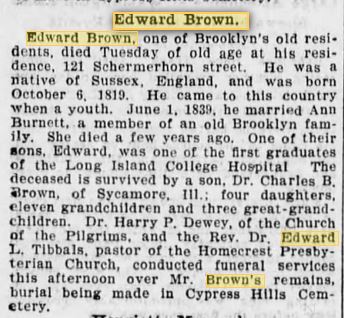 The obituary provided the name of two sons: Edward (the doctor previously mentioned) and Dr. Charles B. Brown of Sycamre, Ill. Charles is well documented in Illinois records, including a death record which named his birth location of Drummondville, Ontario, Canada.4 This was the first time I had a province to work with.

Finally with another lead to chase, I worked on Hattie (Harriet) and found she was born in Canada in 1860. With several dozen Edward Browns in Canada in 1861, it was much easier to search for a one-year-old child named Harriet Brown. Thanks to these records, I was able to name the previously unnamed daughters from the obituary and discovered two more children who were already deceased at the time of Edward’s death.

Edward’s first three children were born in New York. In 1846, he moved to Canada where he was found on the 1861 Census of Canada in Stanford, Welland, Canada West [Ontario] with his family.6 His profession was as a baker, which was unique enough to help when tracking him. He and Ann are on the 1871 Census of Canada in Woodhouse, Norfolk South, Ontario, along with four of their children: Charles, Annie, Emma, and Hattie. They state their religion as Presbyterian.7 Edward and Ann returned to the US and lived for a time in Rhode Island before returning Brooklyn.8 He lived with daughter Elizabeth (Brown) Mason in Brooklyn after his wife Ann’s death. He died 6 Oct 1906 in Brooklyn9 and was buried in Cypress Hills Cemetery in the Brown-Frith family plot in grave 17 with his younger brother Marshall.10

His 8 children as I currently know them:
1. Dr. Edward A. Brown, MD was born in 1840 in New York. He was mentioned in his father’s obit as being an early graduate of Long Island College Hospital. I found him listed as alumni in a history of the college. He signed Elizabeth Heriott Brown’s death certificate in 1868 and appears in the 1868 and 1869 Brooklyn City Directory as a physician with an address on Skillman. He died in January 1871 at the age of 30 in Woodhouse, Norfolk South, Ontario, Canada, from consumption.11 His profession is listed as surgeon.

2. Robert S. Brown was born Jun 1843 in New York. He appears on the 1861 Canadian Census in Stanford, Welland, Canada West with his parents and siblings. In the same location as his parents in 1871, there is a Robert S. Brown with wife Eliza and son Charles.12 I believe this is our Robert based on his U.S. birth and his occupation as baker, but I found no marriage record and both Eliza and Charles seem to disappear after this record. I don’t know if they divorced or if his wife and child died. Robert next appears on the 1880 Federal Census in Canadaigua, Ontario, New York with wife Jane (Cross) Limmer Brown (1846-1928) and her two children from a previous marriage.13 Based on later records, it appears that he and Jane married in about 1876, but I have not found a marriage record for them in Canada or New York. Both of her children from her previous marriage were born in Canada, and she later states an immigration date to the U.S. of 1876, so it is probable that she and Robert met and married in Canada before he returned to the U.S.14 The family removed to Kansas in the early 1880s and he was next found in Leavenworth in 1885 with Jane and her sons. He was found again in 1895 with wife Jane and their child Lloyd Ellsworth Mitchell Brown (1891-1964).15,16 Robert died 8 Nov 1901 and was buried in Mount Muncie Cemetery, Lansing, Leavenworth, Kansas.17 Jane died 29 Apr 1928 in Peoria, Illinois, and was buried 2 May 1928 in Mount Muncie with Robert.18 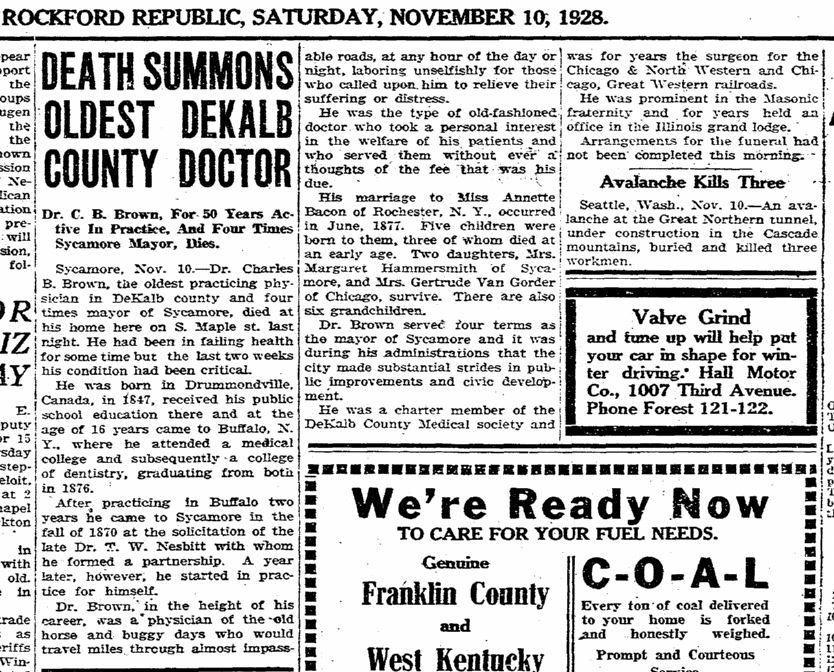 6. Annie S. Brown was born about 1852 in Ontario, Canada. She was found on the 1861 Canadian Census in Stanford, Welland, Canada West with her family. She is on the 1871 Census of Canada (age 19) with her family. I was not able to locate a marriage or death record for Annie. Based on her father’s obituary (4 surviving daughters) I know she is still alive in 1906, but do not know who she married..

7. Emma F. Brown was born about 1856 in Ontario, Canada. She was found on the 1861 Canadian Census in Stanford, Welland, Canada West with her family. She is on the 1871 Census of Canada (age 15) with her family. Once again, I found no marriage or death record for Emma. Based on her father’s obituary (4 surviving daughters) I know she is still alive in 1906, but do not know who she married.

Annoyingly, I still don’t know who Annie and Emma married so the most I can say is that they died after 1906.