You are here: Home / Walker/Heisler/Orme/Harford / The Baseball Team

The Nine Children of William and Nannie (Heisler) Walker

Let me preface this by saying that these people have been nothing less than a giant pain in my… neck. It appears that the Walkers didn’t really associate much later in life and talked to each other rarely. Most of them were deceased by the time I started to pay attention to family things in the mid-1960s. My cousins literally had no idea that the man who lived two doors away from them when they were children was their grandfather’s brother.

It’s possible that once Nannie Walker was no longer alive to tell them to get along, many of her children simply stopped doing so. It’s much more likely that once they moved out of the old neighborhood and their children married and produced grandchildren, they simply didn’t get drawn together as they had before. What is clear, is that with the aging and subsequent deaths of most of Nannie and William’s grandchildren, information about their parents and cousins was much harder to come by.

William Z and Nannie had nine known children – enough for their own baseball team: William Leslie, Eleanor Mary, Edna, Frank Orme, John E., William Harry, Ralph, William, Marion Edith, and Ruth. In 1900 Nannie Walker stated that she has had 7 children, 5 of whom are living – on the page are Leslie, Eleanor, Edna, John, and Harry – deceased would be Frank and Ralph. Marion and Ruth were not yet born. All children appear on a family bible page, some are in the Philadelphia Birth Registrations, and some have their birth recorded at the time of their baptism.

I have a copy of a family bible page from my grandmother’s papers that listed the birth dates of all nine Walker children.1 My grandmother told me that the page was all some of the kids (including my grandfather Harry) had for proof of birth. Those birth dates match the birth dates found for some of the children in the baptismal records from the Church of Redemption. Not all the children were baptized in the same church, some were baptized in groups as older children, and some weren’t baptized at all. The bible record appears to be a copy made at a later date as the information is all done in the same hand and in a consistent manner. 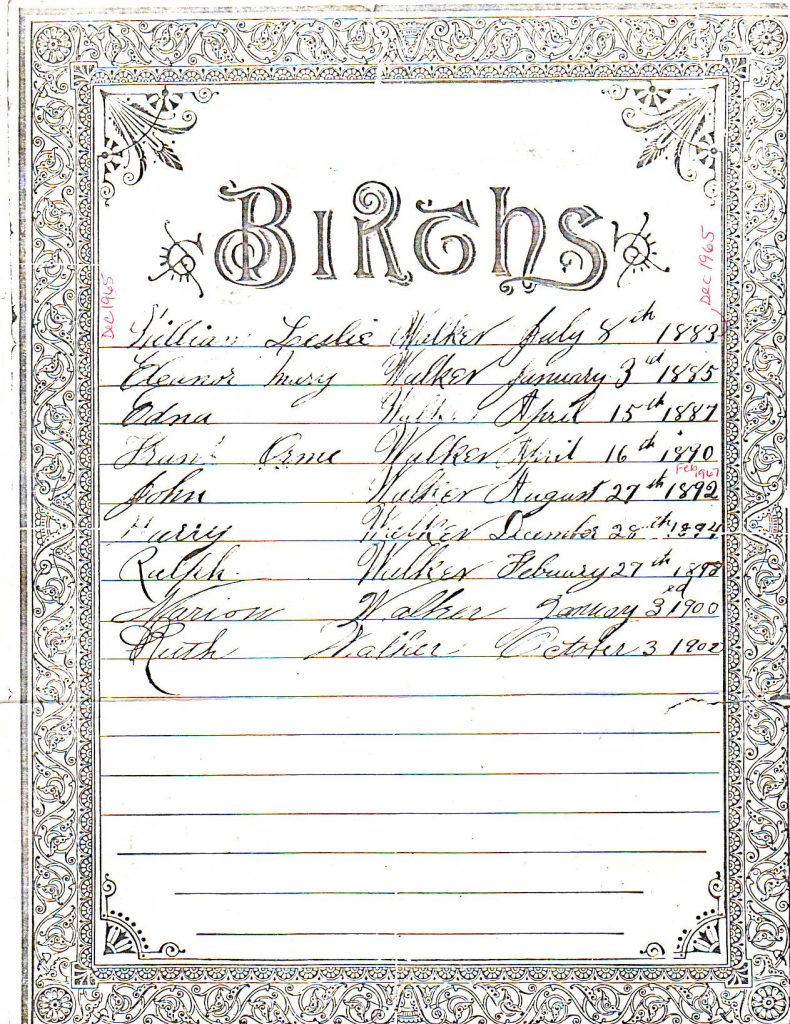 Here’s what we (my cousin Jamie – an incredibly talented researcher – and I) can currently prove. Any help in filling in the blanks is appreciated. I’ve sourced the children here, but not the grandchildren. Those sources are available on the BurgraffScott tree on Ancestry and will eventually appear on Family Search.

William Leslie Walker – known as Leslie. He was born on 8 Jul 18832 and baptized 13 Sep 1885 in the Church of the Holy Redemption.3 In 1900, he’s found at home with his parents, working as a carpet weaver.4 Then Leslie disappeared and the first time I find any records for him is the birth of his oldest daughter in 1922 in Cook County, Illinois.5 He married Madeline Williams in about 1920, probably in Illinois. Madeline was born 15 Oct 1898 in Saginaw, Michigan, the daughter of William David Williams and Mamie M. Sanborn. I have not yet located Leslie on the 1910 or 1920 census. He and his wife and children next appear on the 1930 census in Philadelphia, living with his parents.6 He’s working as a circulation salesman for the newspaper. Extremely confusing is the 1940 census when he’s enumerated as Harold A. Walker.7 It’s impossible to know the how or why, but this is our Leslie and his wife and children. He’s now employed as an engineer in building construction. Leslie died 20 Nov 1965 and was buried with his parents in Greenmount Cemetery.8,9 His wife Madeline died in Sep 1983.10 Her burial location is not known. Update – We found more records on Leslie and there will be a separate post for him soon.  I’ll link it here when I complete it.

Eleanor Mary Walker. She was born 3 Jan 188511 and baptized 13 Sep 1885 in the Church of the Holy Redemption.12 Eleanor married Harry Chester Hirst (1886-1966) in about 1920. They relocated to Collingswood, Camden, New Jersey. Eleanor died there 17 Jan 196513 and is interred in Harleigh Cemetery with her daughter and husband.14 Eleanor and Harry had one known child:
1. Janice Elizabeth Hirst – born 17 Mar 1923 in Camden County, New Jersey. Janice was a nurse in the U.S. Army. She died at Fitzsimmons Army Hospital in Denver, Colorado, on 15 Aug 1946. She was returned to her family in New Jersey and interred in Harleigh Cemetery.

Edna Walker. Per the family bible page, she was born 15 Apr 1887.15 I did not locate a baptism record for her. There is birth record for a Ralphedda Walker, daughter of William, born 16 Apr 1887. It is possible this is our Edna. I would need to see the original record to be sure. She appears in the home of her parents through 1930. In 1940, she appears as a boarder, still living in Philadelphia. The record states she’d been living in the same home since 1935. Edna was employed as a looper in the hosiery industry from at least 1920 and this appears as the occupation on her death certificate. The looper is the person that puts the toes in the hose and closes the toe. Edna never married and died 18 Dec 1964 in Philadelphia.16 While the birth date on the record did not match what we have, her parents were listed and the informant was her nephew Frederick W. Schmitt. She was buried 21 Dec 1964 in Greenmount Cemetery. No obituary has been located for Edna. 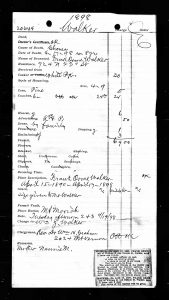 Frank Orme Walker. Frank was born 15 Apr 189017 and died of Chorea 17 Apr 1898.18 Frank was not found in the birth registrations. Chorea is an abnormal involuntary movement derived from the Greek word “dance.” It is characterized by brief, abrupt, irregular, unpredictable, non-stereotyped movements. He was buried on 19 Apr 1898 in Mount Moriah Cemetery. An obituary is included with the record from the Oliver Bair Funeral Home, but it is not known what paper it came from. The obit was not found in the Philadelphia Inquirer. 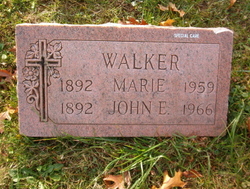 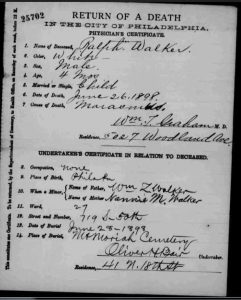 Ralph Walker. Ralph was born 27 Feb 1898 and died of marasmus on 26 Jun 1898.21 He was interred on 28 Jun 1898 in Mount Moriah Cemetery. An obituary is included with the record from the Oliver Bair Funeral Home, but it is not known what paper it came from. The obit was not found in the Philadelphia Inquirer.