The Family of William Frith the Immigrant Ancestor

I have a love/hate relationship with William Frith. He’s an open book and yet annoyingly devoid of records that would lead me further or provide much help in an ancestor search. He rudely dies in 1855 so there is only one census record to work from and no death notice or death certificate.

William Frith was born in England about 1806. One of William’s children stated his full name was William Henry Frith1 and the name William Henry appears frequently in this line, including his oldest known son. However, both are common names of the time. His oldest definitive record with a birth year is the passenger list from the Hampton which arrived in New York on 14 Jul 1837. His stated age is 31.2

On 15 Aug 1836, William Frith married Frances Brown in Saint James, Westminster, London, England.3 I have not yet looked at the original record to see if it provides further information such as parents or a birth location for William. [Update May 2016 – the source record provided no further information.]

On the Hampton’s passenger list, William states his profession as “Gentleman.” He is accompanied by wife Frances, age 23. They are not accompanied by any children; however, based on the 11 Oct 1837 birth date of daughter Fanny C., Frances was pregnant at the time of their immigration.

The 1840 census is consistent with his known family and also states that one person (has to be him) is involved in manufacturing or trade.4 On the 1850 census, William’s occupation is stated as “Hardware.”5 He never appears in the New York or Brooklyn City Directories, although there are several Friths of about the same age from England who work in trade jobs such as cabinetmaking and steel. I have not been able to tie any of these Friths together yet. 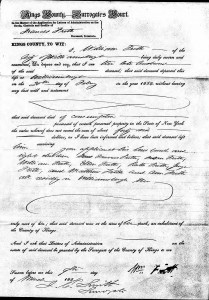 Frances (Brown) Frith died 20 Feb 1854 in Brooklyn, and on 9 March William filed for Letters of Administration for her estate.6 In that application, he named their eight surviving children. She was interred in grave 8 of the Brown/Frith family plot, Sec 2, Lot 161 in Cypress Hills Cemetery.7 Sadly, youngest daughter Anna died only a few months later in Jul 1854 at the age of 7 months and was interred with her mother.8 There are no headstones in the family plot.

William passed away in April 1855 and was interred with his wife on 17 April in Cypress Hills Cemetery in grave 12.9

Even though he left behind 7 children under the age of 18, I have not yet found a probate file for him. It appears that the children were taken in by Ellen Winn (1784-1860). Ellen and William Winn (d. bef 1850) traveled with William and Frances from England aboard the Hampton and is most likely a relation, but I have not yet figured out how. The Winns were close enough that William and Frances named second daughter, Susan Wynn Frith for one of them. I have not been able to locate Ellen or any of the children on the 1855 New York State Census, but in 1860, Ruth, George, and Matthew are enumerated under the name Winn in Brooklyn with Ellen.10 Unfortunately, the 1860 does not prove relationships. [Update May 2016 – A search of films of guardianship records showed no entries for the Frith children or Ellen Winn.]