The children of Peter Charles and Margaret (Swasey) McLean:

1. Charles Edward McLean was born in 1830 in New York City, New York. He’s first found by name on the 1850 census with his parents in Williamsburg, Brooklyn, Kings, New York.1 The 1855 New York Census provided his birth county.2 He is on his own in the 1860 census.3 Charles went with his sister-in-law Susan W. (Frith) McLean to bring his younger brother Peter B. home from Philadelphia in 1862.

On 2 Dec 1868 in Brooklyn, the 37 year-old Charles, married 20 year-old Isabella Marie Brown. According to the marriage record, Isabella was the daughter of Jacob M. and Margaret (Miller) Brown.4 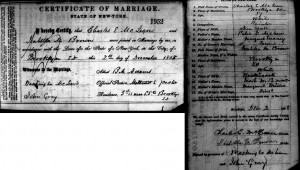 Isabella Marie (Brown) McLean was born 19 July 1846 in Hackensack, Bergen, New Jersey. She had one sibling Freeman Poole Brown (1849-1925). Her mother died sometime after the 1850 census and while her father and brother were easily located, Isabella proved difficult. It is possible that she was sent to live with her mother’s family while young. After Charles’s death, Isabella moved to Huntsville, Madison, Alabama, with daughter Cordelia and her husband. She died there on 18 January 1922 and was interred in Maple Hill Cemetery. Her stone has her name as MACLEAN and it is probable that it was placed well after her death as it matches the stones of her daughter and son-in-law.

In about 1862, he married Mary Elizabeth Brown. Mary was born about 1842 and is the daughter of David H. Brown (1818-1900). Washington worked as a painter and wallpaper hanger. He’s first found in the 1865 Brooklyn city directory7 at 236 Grand and remains at the address until the 1880s when he relocates to 285 Grand. 236 Grand is a 3-story brownstone and appears to be both business and home, but 285 is a single-story brick business. In 1890, his residence is listed as Port Washington in Queens, and that is where he passed away on 27 Nov 1891.8

Mary apparently continued to run the business with her son David for a short time as she appears in the 1892 and 1893 city directories.9 In 1898, she provided a deposition for her sister-in-law Susan W. (Frith) McLean in the matter of her widow’s pension. On the 1900 census, Mary stated she had a total of five children, three of whom were still living.10 (David, Margaret, and Ann). Mary died 11 Jun 1930 in Port Washington, Nassau, New York.

5. Sarah Amelia McLean was born in 1842 in Williamsburg, Brooklyn, Kings, New York. She can be found there with her parents and sibling on multiple census records. According to the 1870 census record Sarah was a music teacher; she and her father resided with her older brother Peter B. and his family.13 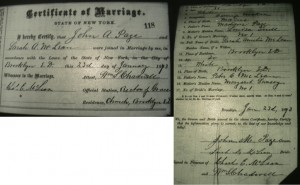 Sarah died in Brooklyn 24 Nov 191216 and was interred in Green-Wood Cemetery. Her obituary in the Brooklyn Daily Eagle was brief.17

John eventually relocated to Rockville Center in Nassau County where he remained until his death on 2 Mar 1931. His obituary appeared in the New York Times on 3 Mar 1931.18 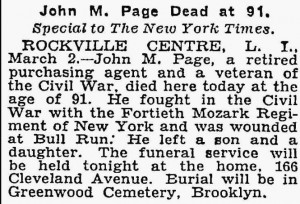 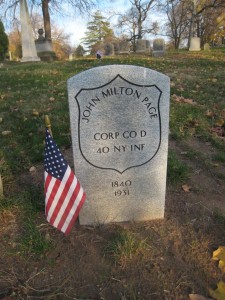 He and Sarah are both interred in Greenwood Cemetery in Brooklyn.19 I have requested photographs of her tombstone.

Peter Charles McLean was born 28 Apr 18051 in Columbia County, New York.2 It is not yet positively known who his parents are, but I believe he might be the son of Peter and Mary McLean. More research in this area is required. His daughter-in-law Susan Winn (Frith) McLean referred to him in depositions as Charles, indicating that was his preferred name.

Circa 1929, he married Margaret Swasey who was born about 16 Jun 1806 in Newburyport, Essex, Massachusetts. She was the daughter of Samuel Swasey and Sarah (Sally) Leigh. Peter Charles (with a female of the appropriate age to be Margaret) was found on the 1830 census in Ward 7 of New York City,3 but I have been unable to locate him in 1840. Peter C. relocated to Williamsburg in 1842, and thereafter he and his family are found on the 1850, 1860, and 1870 federal census records as well as the 1855 New York State Census.4,5,6,7

Margaret passed away 11 Sep 1854 in Williamsburg and was probably interred in Union Cemetery. Her death notice appeared in the New York Daily Times.

Peter Charles was a house, sign, and fresco painter. Several of his sons followed him into that trade and either worked with him or opened their own businesses. The city directories for Brooklyn between 1860 and 1870 list both he and his sons with paint and wallpaper businesses located on Grand Avenue. He never remarried.

Peter Charles was nothing less than a stand-up guy. When his desperately ill son Peter B. came home from the war in early 1862, he moved in with his father. For almost three years, Peter Charles took care of his son and supported Peter B.’s family as he recovered. In about 1869, Peter Charles suffered a stroke that left him paralyzed and unable to care for himself. Peter B. took in his father and Peter Charles remained with his son until his death on 27 Feb 1872.

He was interred on 29 Feb 1872 in Union Cemetery.9 I have not yet found an obituary.

*note – Union Cemetery was closed and the bodies relocated. I will cover this in a separate post.