Margaret Swasey b. abt 1806 in Massachusetts is the proven wife of Peter Charles McLean based on census records and being named in her daughter Sarah Amelia’s death records. Margaret was our brick wall for many years. We knew that Margaret had married Peter circa 1829/30 based on the age of their first child Charles Edward born 1830/31. Peter C. McLean was found on the 1830 Federal Census in Ward 7 New York as a male 20-29 with a female 20-29 presumed to be Margaret prior to the birth of Charles. Everything I knew about Margaret was posted on 24 Jun 2014.

With the release of the wills and probate on Ancestry, I did a routine search for the name of Swasey in New York prior to 1860. Margaret Swasey McLean died in 1854 so I was hoping to find a father who had named her or her children in a will.

In an application for Letters of Administration on the Estate of Nathaniel K. Swasey (deceased 28 Jul 1845; filing dated 22 Aug 1845) Sarah Swasey (signed Sarah Swasy) named herself as the mother of Nathaniel and states she and the following siblings of Nathaniel survive:
Stephen Swasey of Albany
Margaret wife of Peter C. McLean
Rebecca wife of David Bruce Jr
Sarah Swasey
Each of the children (and husbands) signed documents giving their rights up to Sarah.1
[Click on the image for full size] 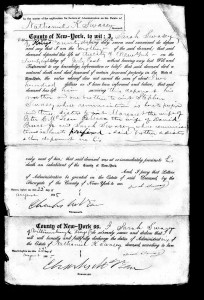 Based on the information found in that will and probate file, I researched each of the named children, spouses, and mother Sarah to reach the following conclusions:

Her are the facts:
1803 – 23 Feb 1803 Sarah “Sallie” Leigh and Samuel Swasey marry in Newburyport, Essex, Massachusetts.2 There are multiple records for their marriage on 14 Jul 1803, but the record from the New England Genealogical Society is the one with the earlier date and is consistent with the recorded birth of their first child Stephen in Dec 1803. Examination of the original record is now on my To-Do list.
1810 – Samuel is found (Sam Swasy) on the 1810 Federal Census in Albany, New York.3 [Daughters Sarah E. b. abt 1811 and Rebecca b. abt 1814 both claim Albany as their birth county on later NY State Census records.]
1813 – Samuel appears in The Albany Argus, 2 July, page 1, column 3 as a partner in business as a morocco dresser (a specialized process for kid (goat) leather). [Son Stephen Swasey is also listed a morocco dresser on later census records. Son Nathaniel is a leather dealer in a city directory.]
1814 – Samuel offers $20 reward for a runaway indentured apprentice, Albany Argus, 7 Jan, p4.
1815 – Samuel’s property is sold by the Sheriff at auction in Albany – Albany Gazette, 20 Feb, p4.
1817 – Samuel Swasey appears in the New York City list of letters – National Advocate for the Country, 3 Jan, p2.
1820 – Samuel Swasey appears in the list of letters in New York City – New York Columbian, 1 May, p4. [Samuel was not found on the 1820 census, but if he was living in a boarding house or with someone else he would not appear as this census only listed the heads of households.]
1822 – Mrs. Sarah Swasey appears in the list of letters – Albany Argus 4 Oct 1822 p3.
1823-24 – Samuel Swasey appears in the New York City Directory as a morocco dresser at 38 Spruce.4
1825 – Samuel Swasey appears in the city directory as a morocco dresser at 4 Ferry. [This is the last record I found for Samuel.]
1829 – Sarah Swasey first appears in the city directory running a boarding house in New York City.
1830 – Sarah Swasey is found on the 1830 Federal Census in New York Ward 45 – the city directory of the same year indicates she is running a boarding house.6 This is the same ward that daughter Margaret McLean is living in.
1834 – Daughter Rebecca Swasey married David Bruce Jr. in New York City.7
1840 – Samuel Swasey (age 20-29) along with an older woman (40-50) is found in Ward 7 – this is the same Ward as Peter McLean. The age is appropriate for Sarah.
1848 – Rebecca Swasey Bruce gives birth to daughter Sarah Leigh Bruce.8
1850 – Sarah Swasey is found on the 1850 Federal Census in Williamsburg (Brooklyn), Kings, New York with Rebecca Bruce and her family.9
1854 – 11 Sep – Sarah was interred in the Bruce family plot at Cypress Hills. I have not yet found a death notice or certificate for her. 10

When I received the plot list for the Bruce family plot in Cypress Hills it noted that Nathaniel Swasey (age 28) was interred in this plot along with Samuel Swasey (age 29) and John Bruce (age 42) on 28 Apr 1848. No death dates were shown, but we know that Nathaniel died in 1845, so these 3 individuals were obviously reinterred from elsewhere. We also know this Samuel must be a son, as the father Samuel b.1781 would have been about 44 when last found in 1825.

The Samuel and Sarah (Leigh) Swasey family (based on the above information) is up on Ancestry and FamilySearch now. Seeing all the Bruce names now explains where some of the names used by both Peter Charles and Peter Byron McLean came from. They had a ton of Bruce cousins and the family was very well off.

There is much more research to do in proving the line back, but at least I know where to look now. And all because of this one document. Happiness is surveying a pile of rubble that was once a brick wall.