You are here: Home / McLean/Frith/Brimlow/Brown / Chasing a Family Named Brown in New York

I was led to William and Elizabeth through their daughter Frances (Brown) Frith (1815-1854) who was interred in Cypress Hills Cemetery. My distant cousin Chris Beal had sent me a good bit of information, but with even more information online now it was important to take a second look. In hopes of learning more, I retraced some of Chris’s steps (he’s an excellent genealogist so it was easy to go down the path he had blazed) and contacted Cypress Hills to request a plot listing for Frances and those interred with her in the Brown-Frith plot, Sec 2, Lot 161. I received an interment list with 21 more people on it. Of those 21, I’ve been able to establish the familial relationship between Frances (Brown) Frith and 17 of those individuals, including her parents William and Elizabeth Brown.1 Many are William and Elizabeth’s children and grandchildren. 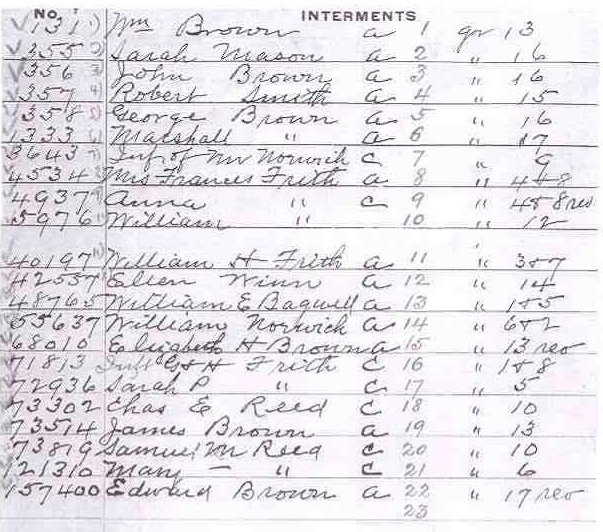 There was also a major “breaking down the brick wall” moment with this family when I really paid attention to the 1868 Certificate of Death record of Elizabeth Heriott Brown.2 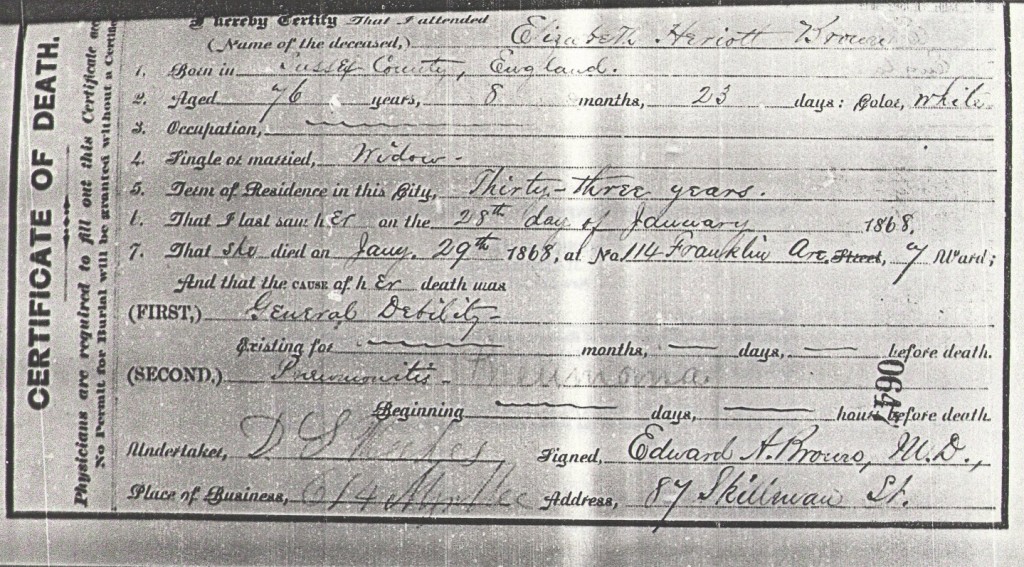 In the summer of 2010, I found this record in Salt Lake City, but there was nothing else to help me at the time. I didn’t know where to look in Sussex, so I just tucked the file away and went to work other lines. This year, I decided to revisit each of my lines and write about them. In writing about a family your perspective changes and you have to go back and look for things you may not have looked at before. There has been an explosion in “searchable” online records in the last few years and suddenly the things I most needed began to fall into place.
The clues and questions in my file from 2010:
1. Her name – DUH! I didn’t really miss this one. Heriott had to be a family or maiden name. But 5 years ago, I found no records for an Elizabeth Heriott – NONE, NADA, ZIP, ZERO. They simply weren’t online in 2010.
2. The completeness of this record – records from this era are notoriously lacking in detail and normally would only give an age in years or say England. Why is this record so complete with a full name, age, and location of birth?
3. The address where she died. The address meant nothing at the time, but it factored in this time when I did a search and worked with the address.
4. The name of the doctor and his address. I knew that she had a son named Edward, but he wasn’t a doctor, and he wasn’t living in Brooklyn then. His address meant nothing to me in 2010, but by the time I revisited the family in 2015 it would mean more – half the damn Brown/Frith/Brimlow clan lived and worked with walking distance of this location.

Here’s what I now know about the family and how I know it.

WILLIAM BROWN was born about 1790 in the vicinity of Lewes, Sussex, England. I have used his birth year from the earliest found document that William would have provided the information for, which was an 1835 passenger list. Big surprise, there are several William Browns in that area of Sussex, and I have not yet determined which birth or christening record might be his.

ELIZABETH HERIOTT was born 6 May 1791 in Sussex, England. This information came from her 1868 death record which provided her age at death in days, months, and years along with her maiden name and place of birth. While this information is often suspect, I’m now comfortable accepting the information as I have discovered the person who created the 1868 death record was her grandson, Dr. Edward A. Brown, MD. Based on this information, I can now extend the research. While I’m fairly sure I’ve nailed her parents down, I’ll wait until I can look at the actual records to see if I can gather more information before declaring them here.

WILLIAM and ELIZABETH married on 23 or 25 Jul 1809, in Saint Nicholas Church, Brighton, Sussex, England. 3 Two marriage listings were found on FamilySearch and Elizabeth’s name is listed on both as Betty Herryott. I’ll be looking at the images for these records in Salt Lake City this spring before making a final determination. This could simply be a transcription error, or there may be some other reason for the two dates. I can at least say they were married in July of 1809. As stated in previous posts, people often married at the main cathedral rather than in their home parishes simply to save a bit of money. There was the standard fee to marry in your town, plus an added fee to the city or county for registration. If you went the main church, you only had to pay the fee for the city you were in.

While I haven’t yet located all the children’s baptism records, some of the family members appear to have been baptized in St. Anne’s in Lewes, and Lewes is about 10 miles outside of Brighton in the farmlands. I’ll be going through the films for the churches in Lewes on my next trip to Salt Lake City.

How did I know to look in Lewes? William Mason (son of William and Elizabeth’s oldest daughter Sarah) stated in his 1892 passport application that he was born in Lewes, and I found his birth was registered there.4 The birth registration also states that his mother and grandfather are from there, so it is reasonable to continue researching the Browns and Heriotts in this location.5 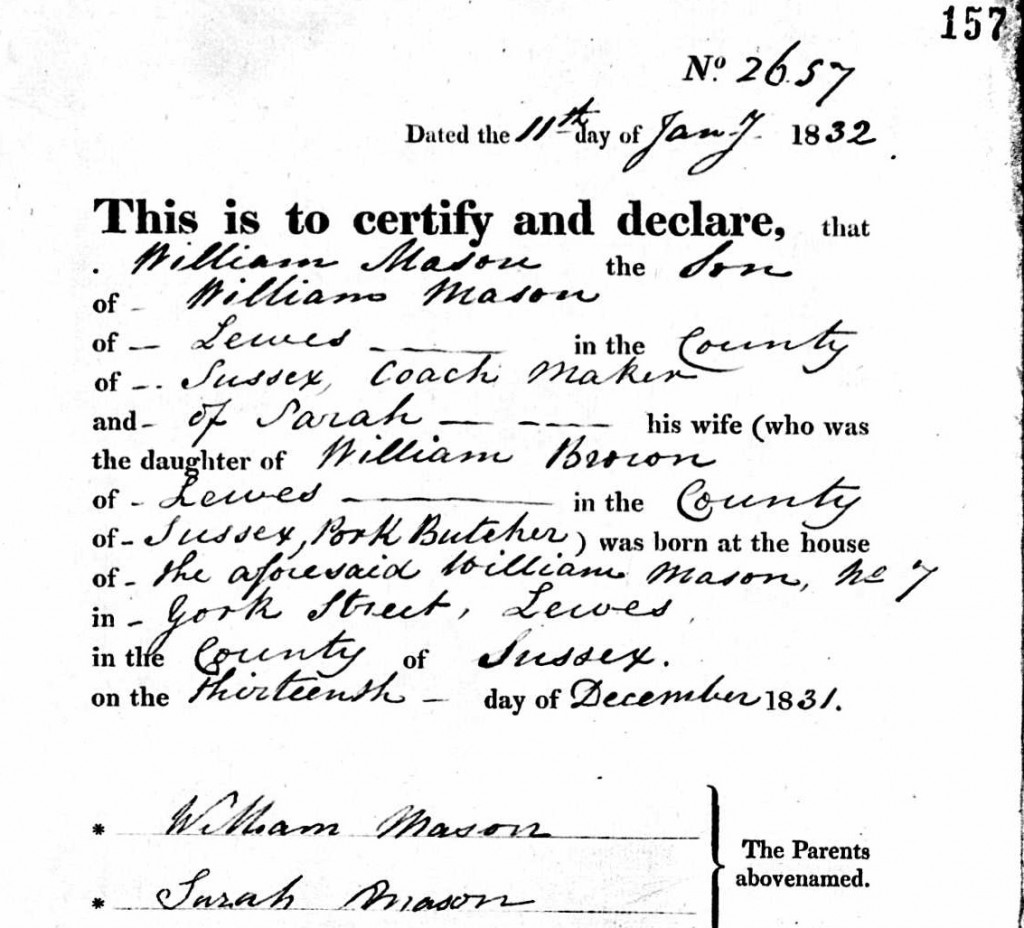 William and Elizabeth had ten known children, all of whom were born in England. All of their children immigrated to New York – eight sailed aboard the Henry Thompson with William and Elizabeth, arriving on 11 Apr 1835.6 Oldest daughter Sarah’s husband William Mason and their two children, William and Henry, were also on that ship. Daughter Frances (Brown) Frith arrived in 1837 with husband William. I have not been able to determine exactly when son John Brown arrived.

William’s occupation on the passenger list was farmer, which hardly seemed to mesh with someone coming to New York or Brooklyn. However, on the above shown birth record, his daughter Sarah states she is the daughter of “William Brown, pork butcher” of Lewes, Sussex.8 An 1844 New York directory lists “Brown, William, butcher, b.r. 343 Grand.”9

He was interred in Cypress Hills Cemetery in Brooklyn, Kings, New York, on 12 Aug 1848.10 His interment record lists his age at death as 63 (1785), but it’s not known who provided that information, nor is it known if William actually died in August 1848 or if he died earlier and was reinterred from elsewhere. I have not been able to locate a death record or obituary for him.

In 1855, Elizabeth Brown, age 56 (1799) was found living with her youngest daughter Mary Ann and her husband Robert William Pringle in Brooklyn.12 She remained with Mary Ann and Robert for the remainder of her life. Elizabeth’s son James is with them in 1865, as is grandson William Brown.13

Elizabeth died from general debility compounded by pneumonia on 29 Jan 1868 in Brooklyn, Kings, New York, and was interred in Cypress Hills Cemetery on 31 Jan 1868.14 A death notice for Elizabeth appeared in The Brooklyn Daily Eagle on Thursday, 30 Jan 1868, pg 3, c2 “BROWN – On Wednesday, Jan 29th, at the residence of her son-in-law, R.W. Pringle, 114 Franklin ave, ELIZABETH BROWN, wife of Wm. Brown, deceased, of Sussex, England. In the 77th year of her age.” I found no will or probate records for Elizabeth. There are no stones or monuments in the family plot. 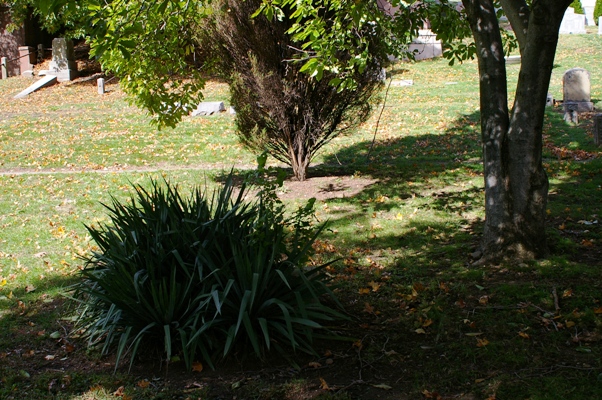