In an earlier series of posts, I talked about Henrietta “Nettie” Ella (Frith) McLean and the fact that she married her first cousin George E. McLean (1867-1915). I’ve also covered much of the McLean line and in that process, I wrote about George’s mother, Susan Wynn (Frith) McLean (1839-1915). Now I need to do a quick clean up on the rest of Frith line before moving on to the Browns and Brimlows.

For those who need a reminder of who’s who, here’s a link to the MacLean, Frith, and Brimlow Pedigree Chart. Today we’re going to take a look at the family of person #6 on this chart, George Richard Frith. The next post will be about the family of William Frith and Frances Brown. 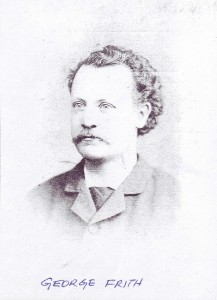 George Richard Frith was born 7 Jan 1848 in Williamsburg, Brooklyn, Kings, New York.1,2 He was the second son, and sixth known child of William Frith and Frances Brown. His parents were both deceased prior to his seventh birthday and until the age of eleven, he and his siblings were taken care of by Ellen Winn. Her exact relationship to the family is not yet known; however, she traveled to New York with William and Frances and is buried in the Brown/Frith family plot in Cypress Hills Cemetery. It is not known where George and his siblings lived after Ellen’s death. 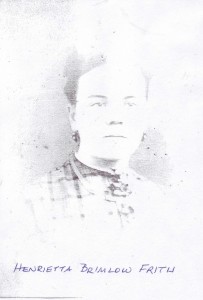 Around 1868, George married Henrietta F. Brimlow, born 7 Sep 1847, daughter of George Brimlow and Elizabeth E. Weeks. Henrietta and George’s first known child was born and died in early January of 1870. The baby appears on the interment record at Cypress Hills Cemetery as “Inft of G&H Frith, no age, interred 8 Jan 1870.”3 With no name and no death record for an infant found, it is probable that this child was a stillborn. Six more children would follow, but only two would live to maturity. Two of their children, Ruth and Matthew, died within 10 days of each other in August of 1882 and were buried in Sec 6, South ½ of Lot 596 of Cypress Hills.4,5 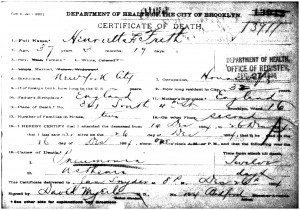 Henrietta F. (Brimlow) Frith died on 26 Dec 1884 from pneumonia and asthma.6 She was pregnant at the time and the child was stillborn. They were buried together in George’s family plot. George filed an application for and was granted Letters of Administration on his wife’s estate, in which he named their surviving children as: Nettie E. about 10 years of age, Ada M. about 8, and Cornelia about 2.7 More research would be required to find out what her estate consisted of. Daughter Cornelia died 14 Mar 1886 and was interred with her mother.8

George worked as a grainer and painter throughout his life as did his brother-in-law Peter B. McLean, and it is likely they worked together at times. George and younger daughter Ada moved to North Hempstead to be near Peter B. and Susan and were enumerated there in 1892.9 Daughter Nettie remained in Brooklyn, living with maternal grandmother Elizabeth (Weeks) Brimlow. After Peter B. McLean’s death, both George and his sister Susan moved in with their married children George E. and Nettie (Frith) McLean and are enumerated there on the 1900 census.10

George Richard Frith died of cirrhosis of the liver on 15 Mar 1903 in Roslyn, Nassau, New York, and was interred on 18 Mar 1903 with his wife in Cypress Hills Cemetery.11 While my initial inclination was to say he drank, it is probable that his liver issues came from spending his life working with lead-based paints.