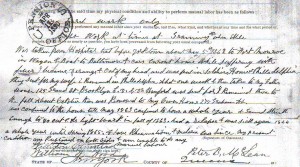 Dr. William H. Hanford, mentioned above, was the McLean family physician. On 14 Mar 1890, he provided an affidavit stating that he had been Peter B.’s physician before the war and

knew him to be sound and able. “I did not see him again till about May 12th 1862. When he came home from seat of war suffering with typhoid Malaria and diarrhea. From May 12th 1862 to May 1863 I saw said Peter B McLean daily during which time he was confined to his house and a confirmed invalid, through the balance of the year 1863. I saw him about three times per week. At the end of 1863 a relapse set in which lasted a whole year. And it was at beginning of 1865 before Mr. McLean had so far recovered that he could again go out of doors. During the year 1865 his chronic diarrhea left him. And since that time 1865 Mr. McLean has been able to do some light work. Yet suffering from Malaria nearly every month since 1865 till the present time frequently developing into rheumatism till he has become a cripple and totally disabled.”

These two statements from the 1890s are fairly straightforward, but they don’t tell you what really happened on a personal level. The 1898 deposition of his widow and family members are a little less clinical. I’ll provide relevant pieces of those depositions in the next two posts and links at the end of the last post to complete transcripts.

While there were hospitals for the seriously ill and wounded, most soldiers were sent home to be cared for as soon as possible. Once discharged, their pay stopped and the burden of their care and support fell on the families. Susan McLean was fortunate that her father-in-law was able to support the family during this period. Pensions at the time were reserved for those who were maimed, hospitalized, or completely disabled. While Peter B. appears to fit the criteria as disabled, no pension or support was filed for prior to 1890.